This is exciting so there are only a small number of manufacturers paying any real attention to releasing decent tablets worth our time talking about. Samsung is one of those manufacturers and they are gearing up to launch not only their best tablet but the best Android tablet ever, the Samsung Galaxy Tab S8 Ultra.

We know quite a lot about this tablet already but in what appears to be the biggest leak for the tablet ever, the marketing material, price, and a marketing video have been leaked which showcases all the new features of this new tablet. 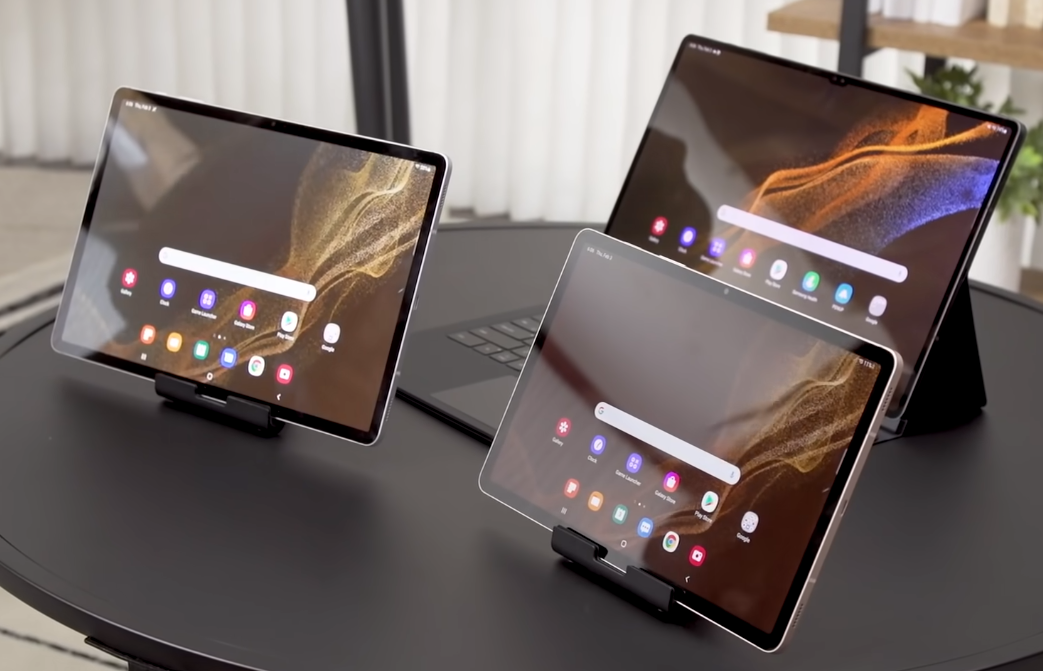 First off, here are the promotional materials for the entire Tab S8 range courtesy of Evan Blass. It shows the tablet next to the Galaxy S22 Ultra where you can use it as a companion for the color palette for your drawings. It also implies that the S Pen of the Tab S8 Ultra will work with the S22 Ultra. But unlike the S22 Ultra, the entire tab S8 lineup has an expandable storage option via a MicroSD card slot.

All the tablets have a 45W of charging speed but Unfortunately, Samsung will not include a charger with any of the Galaxy Tab S8 series. They are only offering a USB C cable, a manual, and a sim ejection tool. This is a little weird because Apple who started this ridiculous trend still ships chargers with their new iPads.

All three S8s have 120Hz displays but only the S8+ and the S8 Ultra have AMOLED displays while it’s LCD on the regular S8. Samsung also mentions the size of the bezels, the S8 Ultra has the thinnest bezels at just 6.3mm while it’s 8.95 for both the S8 and the S8+. It also shows no matter which color you opt for, you’ll always get a black S Pen.

Moving on, a marketing video has also been leaked which shows some features of the tablet. First, it reveals the latency. Both the S8+ and the S8 Ultra are getting a record 2.8ms of latency while it’s 6.2ms on the S8. It also walks us through the different features of the stylus. 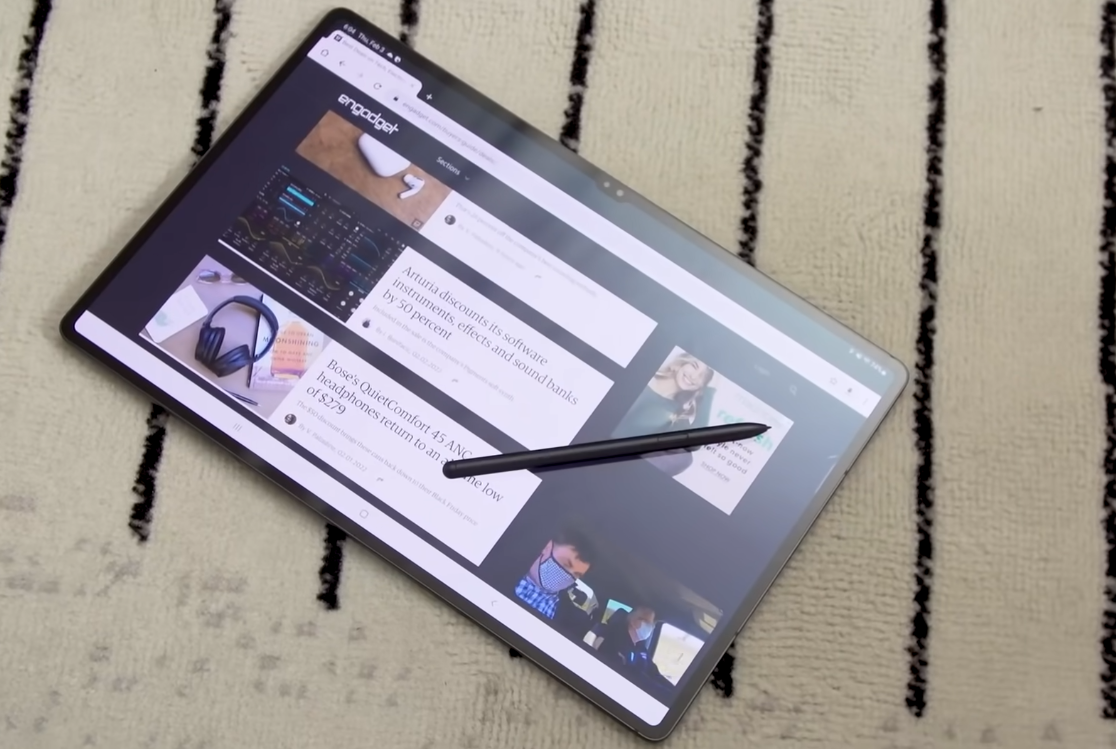 Unfortunately, it’s also the first tablet to house a notch but it does have some camera upgrades. Notably the inclusion of a second 4K ultra-wide-angle camera which lets you do things like auto zoom in and out in video calls similar to what Apple offers in the new iPads. You can also reduce background noise in video calls, live stream with dual-screen and face recording, and much more.

Next, Roland Quandt who is a very reputable source has given detailed official specs along with the prices. As you can see the Tab S8 Ultra will start at 1149 Euros for the wifi-only variant while it’s 1299 for the 5G variant. Do note that only the Ultra is getting a 16GB RAM option while it’s only 8 for the other two tablets. Samsung will launch the tablet alongside the S22 Ultra on the 9th of February.

So the Galaxy S22 Ultra isn’t the only Ultra device we’re looking forward to launching next month. The highly anticipated Galaxy Tab S8 Ultra will also launch either at the same Unpacked Event or maybe even earlier.

We know quite a lot about the tablet already but in what is seemingly the biggest Tab S8 Ultra leak we have so far, all the Tab S8 models have been leaked in real life pictures, we have all the detailed specifications as well as the features, we have leaked prices and also some official stuff to talk about.

But first here is the Tab S8 Ultra in all of its glory. It will have the thinnest bezels we’ve ever seen on a tablet that also houses a notch. But we can’t see that here as the images do an unimpressive job of showcasing the design because of the poor lighting. However, we can see the bezels of the Tab S8+ which are almost identical to the S7+.

The photo of the Tab S8 doesn’t reveal anything either. But thankfully we have the leaked official marketing materials that bear all the design elements. And if you’ve been following the tech news then nothing here should be surprising.

The S8 Ultra houses a notch, and even though many of us don’t like it, it houses a powerful camera and a useful feature to sorta justify the ugliness. You see Samsung introduced auto framing with the Z Fold 2 where it keeps track of the subject using pan and zoom as they move around. Something we also see on the new iPad. And it looks like Samsung has decided to bring that feature to the S8 Ultra. Not only that the selfie camera can also record 4K at 60 fps wide videos for better video calls.

Now coming to the specifications, both the S8 Ultra and S8+ will use AMOLED displays while it is LCD with the regular S8. All three of them will offer a 120Hz refresh rate and all of them have pretty sharp displays too.

Interestingly, the RAM on the S8 Ultra will go up to 16GB with 512GB of storage. And the great thing is all the devices will have a MicroSD card slot for expandable storage.

Here are the battery capacities and the weight. It’s noteworthy that despite offering a 14.6″ display, the Tab S8 Ultra weighs just 728grams. One of the ways they achieved this is by reducing the thickness. It’s just 5.5mm thin which is ridiculously low.

All the tablets will feature Snapdragon 8 Gen 1, there won’t be an Exynos variant. As for the S Pen, the Tab S8 Ultra will also get the record lowest latency the S22 Ultra is getting and that’s just 2.8ms for natural writing or drawing experience.

Take the pricing info with a heavy dose of salt as we’ve seen in the past, more often than not they don’t turn out to be true.

Anyway, let me know your thoughts in the comments.