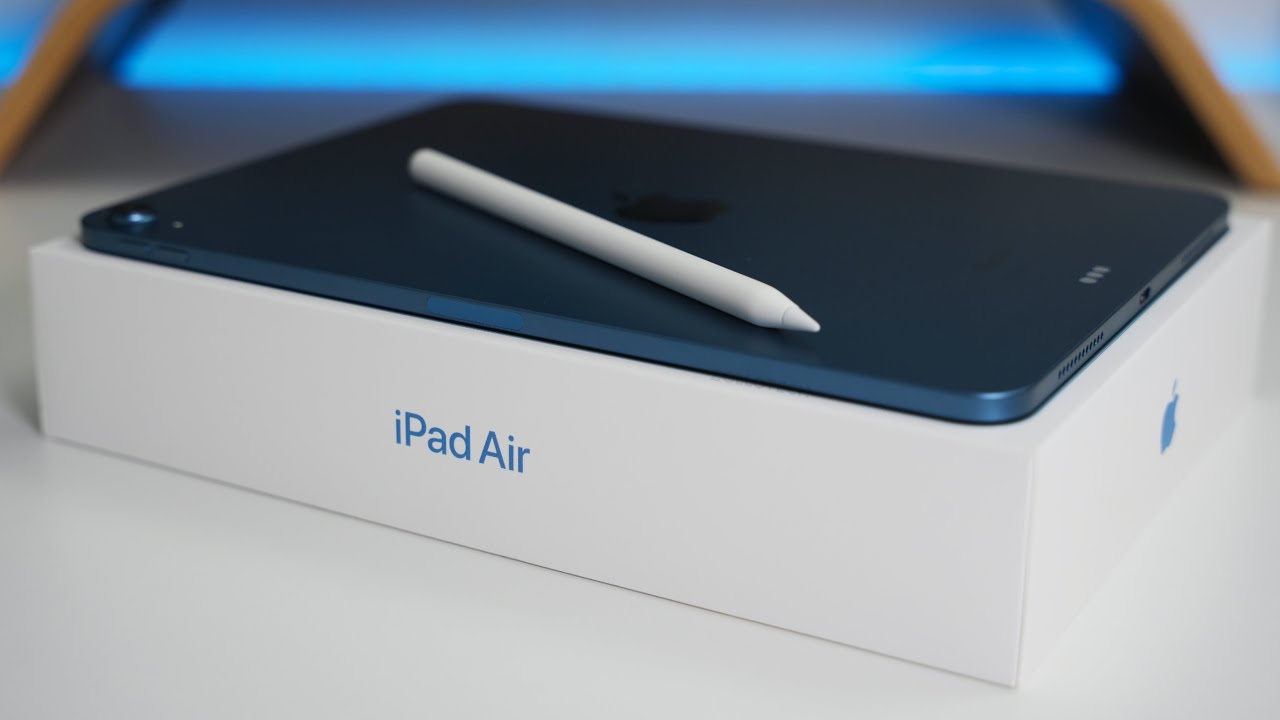 iPad Air (2022) is very compact so it’s just 6.1 millimeters thin. It weighs around about a pound or around 460 grams. And it pretty much has exactly the dimensions as the iPad Air 4th Generation. Which we have here so all of your previous accessories will still work with the new iPad Air. The enclosure is still made with 100% recycled aluminum which is great.

I think that needs to be talked about more and the similarities also continue at the front. So we’ve got a 10.9-inch Liquid Retina Display with a P3 wide color gamut. 500 nits of brightness with uniform bezels. Now, this is a really nice display. It’s not quite as good as the iPad Pro display which has XDR as well as ProMotion technology.

Now, unlike smartphones, on tablets, you do need some bezel so you just have somewhere to hold. Like the 4th Generation iPad Air, we no longer have the TouchID button here at the front. We’ve got it at the top and it works really well.

The biggest improvements are on the inside. So the iPad Air 5th Generation is now powered by Apple’s M1 chip. This is the same chip that we’ve got on the iPad Pros as well as some MacBooks. It’s tried and tested and it’s got excellent performance.

Now, the A14 chip on the 4th Generation is very capable but with this new M1 chip on the iPad Air, you can get up to 60% faster CPU performance and up to two times the faster graphics performance. So if you’re somebody who just casually uses your iPad to watch movies and just do some day-to-day tasks, then this might not be a big jump up for you.

The 5th Generation iPad Air now also has support for 5G. So if you do go for the cellular version, you will get 5G as standard and that means you’ll be able to take advantage of those faster 5G speeds, especially in the long term.

The USB-C port has also been improved. So we’ve got USB 3.2 Gen 2 ports which are twice as fast as the previous generation and you can get speeds of up to 10 GB a second.

Now, if you’re somebody like me who transfers lots of images and videos to your iPad, you’re really going to appreciate those faster speeds. You’ll also be able to connect up to a 6K display via this USB type C cable on your iPad.

And thanks to those faster speeds with apps such as Capture One, which will be coming later this year. You’ll be able to use your iPad as a viewfinder for your professional camera. This is something that I can’t wait to test out.

Right, now as far as I can see, the rear-facing camera is pretty much the same as what we had in the previous generation. So this is a 12-megapixel camera, which can record up to 4K video, but we have a brand new front-facing camera.

So if you’re taking a family video call or something and you’re moving from side to side, then this is actually going to follow you. I absolutely love this and it works flawlessly.

Now the battery is the same size as what we had in the previous generation. And in my experience, it’s still roughly about the same so it’s really good and gets you through the day absolutely fine. You can get up to 10 hours of video playback on a single charge.

And we do have iPadOS 15. I really like iPadOS, I think for a lot of people it pretty much makes an iPad a laptop replacement.

And although we still do not have Final Cut Pro on the iPad, we do have iMovie, which comes as default. It’s going to come with lots of new features in April. Features such as Magic Movie, which will give you some pre-made video templates, Storyboards, as well as the ability to import your iMovie projects into Final Cut Pro on your MacBook.

So if you do want to add some more professional edits and grading and things, then you can take over those projects, that will be coming soon.

Right now, let’s take a look at some of the accessories. So of course, firstly there is the Apple Pencil Generation Two. Now, this is sold separately but it’s a must-have accessory for your iPad. It does magnetically and charges on the side of the iPad Air.

And not only will it give you excellent precision when you are editing images or videos or drawing for example. But the iPad can also recognize your handwriting and convert it into live text.

Now the Magic Keyboard is really nice, it has this floating design, which looks really cool. Having the touchpad gives you much more of that laptop experience. The keyboard is excellent with lots of travel and ideal if you spend a lot of time on your iPad writing documents or replying to emails.

However, as much as I like the Magic Keyboard there are a few things to consider. The first thing is the weight. This actually weighs more than the iPad Air. So combined the iPad Air is no longer as compact as it would be.